💖 What’s Madame So about?/ Where did the name come from/How did you set up?

I am a singer-songwriter, born in Paris & have lived in London for over a decade. I started performing in London on the acoustic scene & then fleshed out my music into a band sound.

When the time came to get a stage name, I didn’t have to look too far; I have been nicknamed Madame So by my entire family since the age of two after my parents overheard me & my cousin do a role play in which I was Madame So (my real name is Solange). In the stages of my acoustic days, I used to call myself ‘Solange (not Beyonce’s sister)’ but that was a bit lengthy so Madame So was just fine.

I’ve always loved music so learning how to play the guitar was an instant inclination. I am inspired by everyday life, from discrimination to relationships of all kinds. My song ‘Sell-by Date’ was about not letting oneself be taken for granted – At the time, I was doing a lot of unpaid internships & I got sick & tired of it & that’s when the hook “Even charity has its sell-by date” came up. On ‘Black is Beautiful’ (five years ago), I talked about the stigmatisation of being a black rocker), & ‘Generation Y’ is about the perpetuation of generational conflicts.

I am inspired by everyday life, from discrimination to relationships of all kinds.

I come from the written word/world. I started writing poetry quite early in life. Through my love of guitar, I wanted to put music to my words. Some of my early stuff doesn’t have a song structure per se & for my earliest songs, I would start with the lyrics & craft a melody around then.

My writing process has since evolved & I have developed & gauged songwriting & structure, so when I write now it’s a mixture of both lyrics & melody coming together with the lyrics changing & progressing throughout the songwriting progress. For instance, the demos for ‘You Say’ & ‘Who Are We To Judge?’ had rather different lyrics. I am also very particular about arrangements, etc. now.

💖 What does Real Friends mean to you/how did it come about?

I wrote ‘Real Friends’ about a particular life experience; an individual who used to duplicate their interaction with everyone surrounding them. I remember them texting me a really personable message about meeting up for cosy drinks in Camden, only to realise the cosy drinks involved 20 ( I am not exaggerating!) other people who had received exactly the same copied & pasted message, hence the lyric “they collect companions as if they were medallions”… Bless…

& given the current global situation which is forcing each & every one of us to sit down with ourselves & reassess our priorities & relationships of all kinds, that is quite topical.

💖 How did Gordan Raphael of The Strokes become familiar with your music?

Gordon Raphael who produced the first three Strokes albums is a great advocate for new music, collaborating with a variety of unsigned musicians & he is also very familiar with the London music scene. So, I am fortunate his ears landed on some of my music.

💖 Who was the first artist you ever saw live?

Nina Simone & Bob Dylan are a music constant, though they evolve constantly at the moment. I am listening to a lot of electronica (Robyn, Peaches, some French Electro) & (re)discovering the genius of New Order. In life, it’s just everyday occurrences that inform my music: the people & things I love & those I dislike all influence my outlook on life & music.

I guess ‘Less is More’ would sum it up best.

I think you can be very impactful with very little, be it from an artwork perspective or a musical one. As I have said to another publication recently, I’d rather my music come with a bare face than hide behind a ton of plastic surgery.  Isn’t it so that you know whether a song is good when performed on an acoustic guitar or a piano with no arrangement? I hear way too much music that is over-produced & the songwriting of which hide behind tons & tons of effects & as result lacks in genuineness. So, yes in a nutshell, LESS IS MORE, while still being engaging.

💖 When you’re not doing band stuff, what do you get up to?

With the current limitations, I have developed a lot of DIY skills, with editing visuals, learning more about tech equipment, etc… In a normal context, when not doing music you’d probably find me at the gym, in museums, at the cinemas, at gigs & pubs. Nothing original at all, but as we have all come to appreciate, somehow vital!

Collaborate rather than compete. By that I mean, instead of turning up for just your soundcheck, then disappearing & returning only to play your set & then go, why not support other bands & artists so each of the bands & acts’ audiences/fanbases get to actually discover new music? This competition mentality within the grassroots/underground circuit is really a plague. A scene is not just a multitude of bands looking/dressing the same & playing a similar type of music, it’s also, or rather should be, about joining viscerally like-minded people…

Also, I’d love to see more collaborations on records: split releases, etc… It seems that people think that is a leisure only reserved to established & signed acts while it really shouldn’t be.

Ultimately, spare a couple of pounds to support the music & art made by artists, which would represent a lifetime investment (you’ll piss that drink you spent over a fiver on in a bit, so why can’t you be bothered chipping in a pound or two for a download that can accompany you anywhere?…)

I am working on a few ideas for new songs, including one about illegal immigrants & I am looking to record some new music in the not-too-distant future.

In the meantime, you can get acquainted with my discography on my Bandcamp, check my videos on Youtube, & visit my website.

I’ll be releasing a new single, entitled ‘A Good Woman’, around International Women’s Day. Wait for it, I’ll go all power ballad-ey on you! 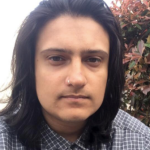